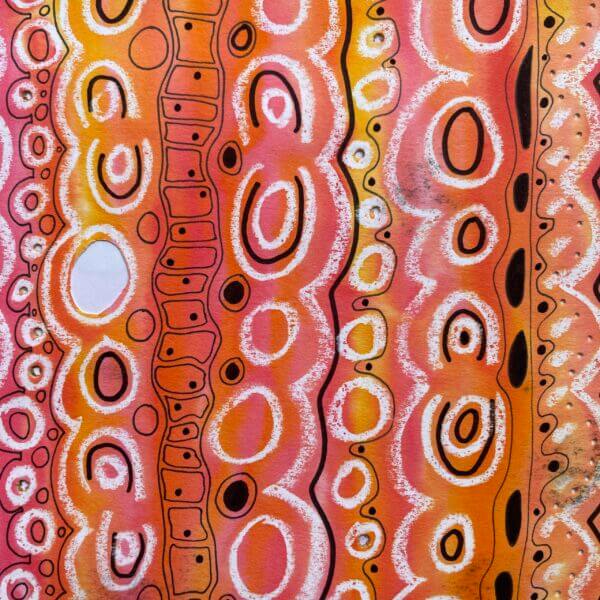 My inspiration for many years has been plants, particularly their structure: stems, leaves, seed pods, branching patterns, it’s all good. I even applied to do Botany at university.

It all stems (see what I did there…) from something I heard in a lecture when I was still at school. I can’t remember the ins and outs of it, but it was an after-hours trip to London, I think the Royal Society, to hear someone (again, I can’t remember who) talk about something or other, and the ONE thing I remember from the talk, and have never forgotten – despite forgetting almost everything else about the trip! – is that the leaves on plants are arranged in such a way, that no leaf is shaded completely by the one above. And the pattern behind the leaf position? The Fibonacci sequence.

It was genuinely as if a lightbulb had been lit up in my brain, and I remember thinking what amazing creations plants were: that was when I decided to study them further.

Fast forward a few decades, and while I’m a dreadful gardener and positively abusive towards my houseplants*, I do still love looking at plants and find them endlessly inspiring. The most common way this inspiration shows in my work is my frequent use of a leaf or branching stem motif.

When I was learning machine embroidery, I used plants as a theme for two courses. A beginners’ course saw me choose an oak leaf as the basis of designs based on shape. I must admit, despite the leaf being my chosen theme, I really wasn’t actually inspired, and as a result I don’t like the designs or even the piece of work that it led to!

For my Diploma, not only was I further along on my journey, with a bit more experience, this time I was genuinely inspired and excited by my chosen theme: the microscopic internal structures of plants and plant cells. I used it as the inspiration for a series of pieces, including this large hanging made from plastic laminate.

A lot of the time, inspiration is just noodling around in my head without being anything more than that. In my experience, I can be inspired from my tips of my toes to the top of my head (like when I discovered the most delicious moss on a mountain in Scotland, and when I heard that Royal Society lecture) but until I have an idea, nothing more happens (which is why nothing has happened with the moss, yet!)  I believe that ideas and inspiration are different animals: you can have one without the other, but to make something great, you really need to have both.

You can have a ton of ideas for things to make, and people can suggest things for you to do, but unless you feel inspired or excited….nothing doing.

Similarly you can be full of inspiration, but until you have an idea, it’s just a warm fuzzy feeling with nowhere to go.

Inspiration is a feeling; an idea is something you can go and do.

Usefully, I’ve found that if I start working on something – on an idea – inspiration will often find me. Doing something, anything, and suddenly I’m feeling inspired.

The other day, I needed to make a functional bag for my new phone. I knew how it would work, as I’d made one a few years ago. I got out the fabrics and notions I needed, and started putting something together. As soon as I started to choose and then place fabrics, I became inspired by what I was doing: and as a result, not only do I have a functional bag, I have a beautiful bag that makes me happy every time I use it.

Similarly, if you’re feeling inspired but don’t know what to do with it, you could play around with the inspiration, maybe do some design work, do a few pages in a sketchbook, write out your thoughts – and an idea will occur to you. It can definitely work both ways.

This is what I will (eventually) do with the moss**: I’ll think about the colours, as that’s what struck me first, and then I might dig out some velvets and experiment with the textures. I’m not sure yet, and I definitely have no idea for what it will lead to. But it doesn’t matter at this point. I just need to trust the process.

Inspiration exists, but it has to find you working.

The ancient Greeks believed that inspiration came from the muses, the inspirational goddesses of literature, science and the arts. They were considered the source of the knowledge embodied in the poetry, lyric songs, and myths related orally in Greek culture. The word itself is from the Latin “inspirare” meaning “to breathe into” and that’s definitely what it feels like to me – a feeling of excitement, and interest, that can come upon me out of the blue.

And finally, even if you’re inspired and you’ve got an idea…it doesn’t always mean something will happen even then! Again, and this is in experience, I’ve always needed the motivation to get started. This could be an impending deadline for a course or an exhibition, or it could be something as simple as realising that I had nothing to post on social media, so I’d better crack on!

I’m currently working on a little project that I was inspired to make about 18 months ago, after reading an article in a magazine. I loved the thought, the concept, of collecting favourite fabrics together in a delicious bundle or book, but didn’t want to copy the idea in the article. The theme inspired me, but not the exact idea.

I started noodling about with fabric, but had no idea where it was going, until the other weekend when I was playing with sketchbook covers. Suddenly, I had an idea – I put two and two together, but still nothing happened…until yesterday, when I finally had the third piece in the puzzle: the motivation of a (perceived) expectation that I should really post something creative on Instagram!

*I’m not alone in my cruelty to houseplants: Gina is too, all the gory details revealed in this week’s podcast!

** I don’t think I blogged about my moss inspiration, but scroll back through my Instagram posts to June, or look in the “inspirations” collection of stories and you might find something!

4 Thoughts to “Ideas and Inspiration”